Fires Over Brinestump: The Final Confrontation

For a behind the scenes look at the setup of this adventure, check out Behind the Screen: The Final Confrontation.

After their first real fight as a group, the party finds their confidence shaken, though working through their personal issues restored some of their resolve. The party returns to Sandpoint for healing, Walthus Proudstump in tow.

As thanks for his help, Paz gives Walthus a gem from their earnings. Antax, having seen Walthus' love and appreciation for his serpentine form, asks Locke (Keiko) to collect a vial of his blood. Antax gives the vial to Walthus with great reverence. Walthus couldn't be more honored. 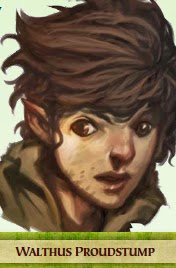 The party visited Koya for healing and advice. Koya revealed that the Soggy River Monster was actually a Wrath Sinspawn, a remnant of the Runelords rule thousands of years ago. Sheriff Balor pays out 1000gp to the party for goblin ears and Gutwad's head, as well as a bonus of 300gp for killing the Soggy River Monster. He's shocked at seeing such a creature up close. During the conversation with the party, Balor accidentally calls Antax a lizardfolk. Antax has heard this kind of insult before, but it conflicted with his growing respect for the sheriff. Antax verbally explodes, his anger and fear seeping into the rest of the party. Horrified, Balor sincerely apologizes; he'd never seen any reptilian humanoids that weren't lizardfolk.

Keiko (Locke)
Keiko wanted to spend time with Koya but the older woman sensed her apprehension.

"I know you and Ameiko have had your problems in the past. I just want you to know that she never forgot you. We've talked many times about what she feels she could have done differently. She remembers you as a brilliant little girl, far smarter than her. She remembers your smile, your fascination with nature, and your lust for life. Whatever you think about her now, I think it's important for you to know."

Keiko, unsure how to process her mixed feelings, teared up and stormed out.

Paz & Adrezi
Paz asked Sandru to sell some of the objects the group found in the Brinestump, while the group returns to the swamp to explore. He also scrounged enough money to purchase a wand of cure light wounds, that, luckily, Locke can use.

"You told me to explore the world, but nothing has changed. Everything is as hard as it's always been."

"But you're so different," Antax said. "You never turn away from me."

"Because the fears you bring up in me, the ones that boil up when you're scared or angry, I've already dealt with. I face them everyday, whether you're here or not. Other people haven't had to do that. It's a blessing for them, I suppose, but it will make your life more difficult. Please, be patient with them. And with yourself."

Back Into the Breach

The party returns to the goblin village to investigate the strange, humanoid footprints Rillka had found. Though their map shows the cabin of the swamp-witch Megus, they choose not to go to her for advice.

Adrezi, Rillka and Locke track the footprints across the swamp to the a cave on the map that has a skull marked on it, a cave that Paz coins the "Goblin Death Cave".

Adrezi scouts the cave ahead with Rillka close behind. The damp, puddle-filled cave shows little sign of being lived in even though the human-booted footprints lead deeper inside.

Paz dismisses Adrezi to protect him from taking damage in whatever combat might come (an action that will have interpersonal consequences later).

Farther into the cave, Antax discovers a web-filled tunnel and is ambushed by a giant spider. Antax, Locke, and Rillka maneuver to confront the creature. 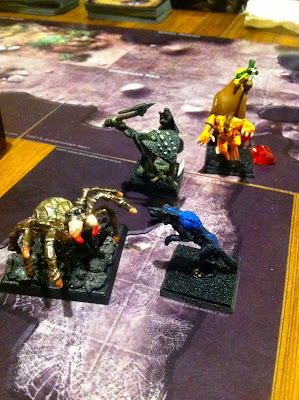 When Paz closes, he is grabbed by several translucent tentacles reaching out from an alcove. The acid from the giant amoeba's grip burns Paz's arm. He summons celestial dogs to attack the creature, but they have a hard time getting into the water to its body. Their attacks distract the creature from its human-target and Paz manages to get away. 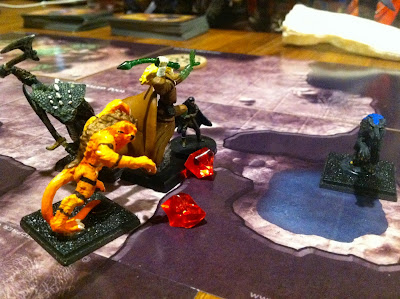 Antax is severely wounded in the battle with the spider, but the group manages to kill it.

Past the spider's lair, the caves largest chamber is filled with more water seeping in from the surrounding swamp. Paz spends some time in meditation convincing a celestial dolphin to explore a deep pond in the center of the cave's first chamber. The dolphin reluctantly agrees to help. The bottom of the pond has several human skeletons, but little else. 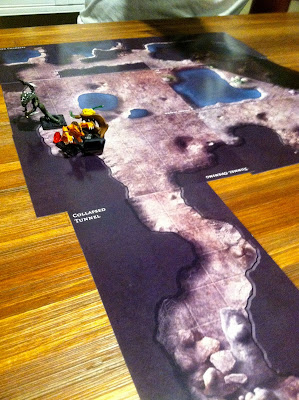 At the end of the chamber, the party finds a large alcove filled with rotting supplies. The words written on the crates are Tien. 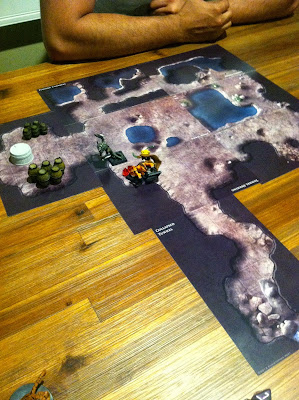 A skeleton in rotted samurai armor sits on top of a large jade and cherrywood chest. As the party enters the room, the samurai animates. I draws a fine wakizashi from a scabbard as the party hears shuffling echoing through the chamber behind them. 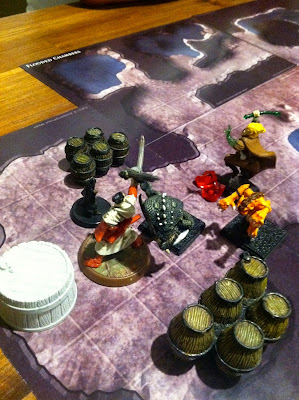 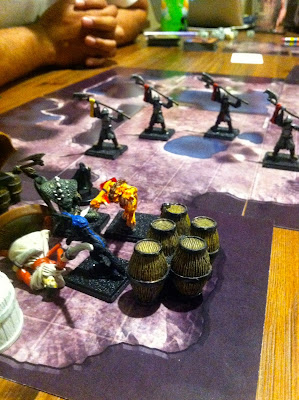 The samurai slashes through the party with brutal skill and speed. Antax, still reeling from the fight with the spider, is severely wounded by the creature. Half-a-dozen skeletons dressed in the rotted remains of Tian civilians crawl out of the pools and the surrounding darkness.

The skeletons' armor and natural resistance to slashing and piercing damage prevents Locke from dealing the kind of damage she's use to, so she makes full use of her "Throw Anything" feat and hurls barrels at the skeletons to great effect. 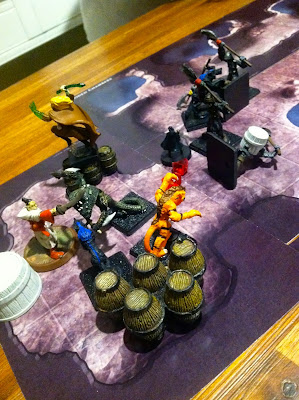 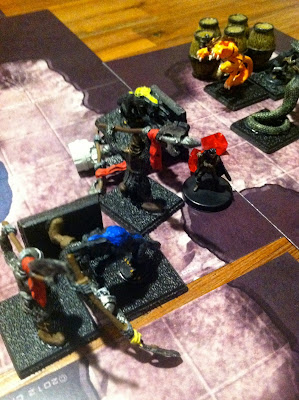 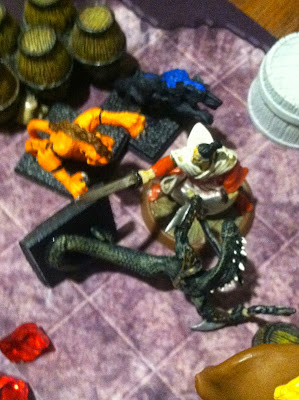 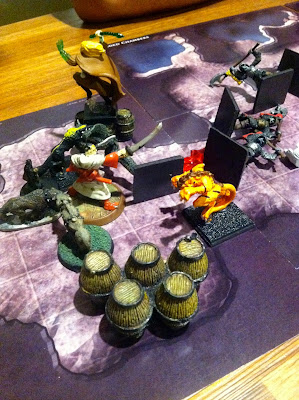 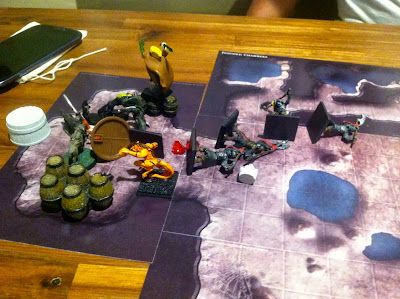 After a pitched and violent battle, the party prevails. The majority of the wand of cure light wounds bought by the party is used up, as were all ten of Paz's summon spells. The party once again questions their abilities as adventurers. Between the giant amoeba and the skeletons emerging from the caves pools has now made Paz paranoid about stagnant water. 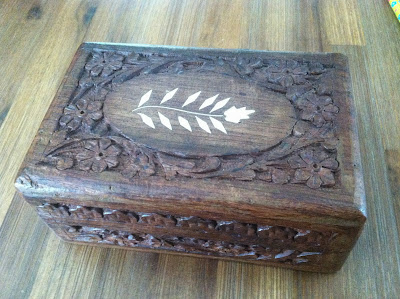 The jade and cherrywood chest is filled with supplies, money, and several books written in Tian. The wakizashi wielded by the undead samurai is magical, though the handle is broken. How long the skeletons had been in the cave is a mystery, though the party assumes these were the 'survivors' of the shipwreck they found with Walthus.

After resting, the party returns once again to Sandpoint. 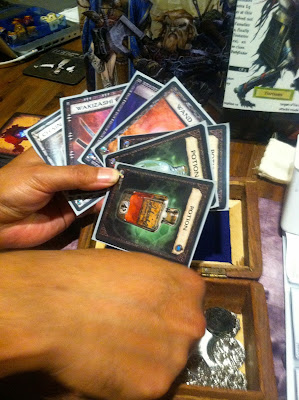 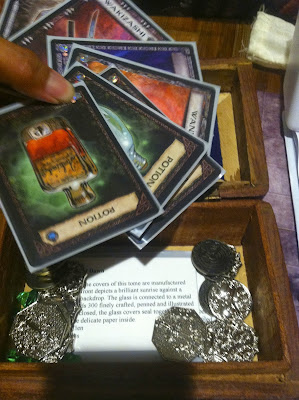